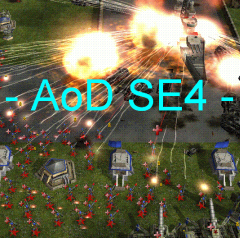 Art of Defence SE4 is a Command and Conquer Generals map. It was originally created in 2006 by an unknown author, then vandalized by people to make it easier to win, and recovered by me in 2008. I released dozens of new updates, each adding more depth to the map, making it more balanced, and more fun to play.

Place the 'art of defense se4 v1-xx' folder in your My Documents/Command and Conquer Generals Data/Maps/ and you're ready to go. Your directory structure should look like this:

AoD map with "don't let them reach the end line" principle. You need to kill the units of the bot before they reach the end of the road. The attacks consist out of 20 waves of increasingly powerful units, followed by 2 bosses. You can change the difficulty of the map by setting the bot to normal, hard or brutal. Normal is playable by novices, hard is a good challenge for experienced players, and brutal is for the AoD veterans.

Unfortunately most of gameplay videos from this map (and CCG in general) got deleted together with the rest of my old YouTube account.